CONTEXT: Ms Gauer’s Eng. 9, Per. 4 Class Was Assigned a Project to Design a Utopian City, collaborating with other classmates to achieve optimal values & design. This is my part of the project. 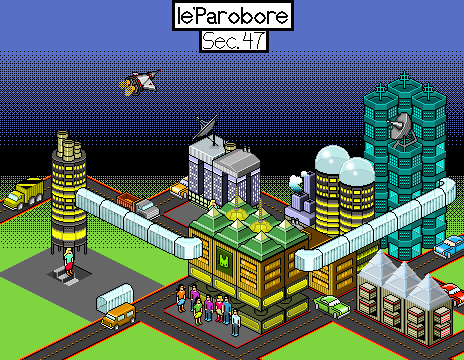 The primary technological industry, mentioned in le’Parobore’s Economics Plan, is represented by a partially covered factory, behind a government building.

A government building in the centre of Section 47 represents the support the local and federal government will have for their cities, being within a short distance from living accomodations. Being close to housing gives civilians an ease of access to various permits and programs that will benefit them.

The large mass of people in front of the Government building reflect that anti-government protests are permissible, should they ever occur.

The grid system in le’Parobore’s streets improves ability to have emergency assistance vehicles from various sections approach housing, should an emergency in the city occur.

Background: le’Parobore was named in such a way that it reflected the motto my group decided the city will uphold: Peace through Strength. The name was taken off of Google Translate in Latin, as “pacem in robore”, and condensed to fit one word. To follow suit with the motto, symbolic colours in our city include Red, Blue, & White; Red for Strength, Blue for Justice, and White for Peace.